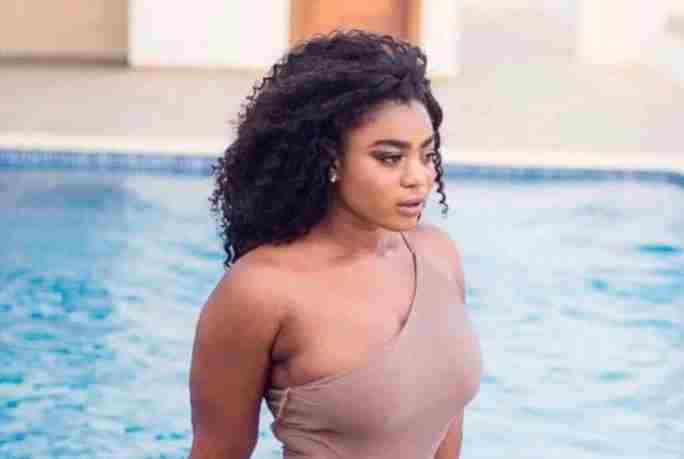 Vivian Okyere, also fondly known as Tundra, is a popular Ghanaian actress from Kumawood who has appeared in quite a number of Ghanaian and local Twi Movies.

She was born on April 7, but year of her birth not known. Vivian grew up partly in Ghana and Republic of Benin.

She attended her primary and secondary education at Serwaa Nyarko Girls School and Nkawkaw Senior High School, both in Ghana respectively.

She also obtained a Bachelor’s degree in Law and was called to bar in the month of September, 2015.

She made her entry into the Ghanaian movie industry some years back through a friend named Sean Paul who introduced her to acting.

She has since starred in several movies and television series, some of which are:

• Feel this moment
• David Baa
• Chinese Mafia
• Holy Family
• Wasted among many others.

The heavily built butts, curvy, beautiful, creative and highly talented Ghanaian star is known for her good interpretation of roles in movies.

She is also blessed with lots of natural endowment.

She once revealed that her pastor told her to use her big butts to win souls for Christ.

The talented actress also revealed how much she admired the Nollywood star, Mercy Johnson and hopes she could be on the screen with her one day.

She is not yet married. There was a rumour making the rounds that she was getting married to Kumawood comedian, Yaw Dabo, a claim she denied strongly.

She is indeed a talent in Ghanaian movie industry, rated one of the richest and most influential with an estimated net worth of about $200,000 US Dollars.

She is a social media personality with large followers. You can reach her on:
Instagram: @Mzephya_sokoo
Facebook: Vivian Okyere