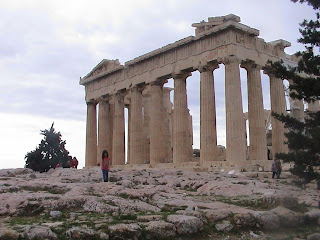 photo: a decent view of the Parthenon without too much scaffolding (copyright the author)

On a recent trip to Athens, the cultural hot potato that is the Elgin Marbles was very much in play. Piles of leaflets at the entrance to the Acropolis make the case for the return of these treasures of the Parthenon (or stolen booty depending on your stance) from the British Museum to Athens.

A brief summary of the story:

From 1799 the British ambassador to the Ottoman Empire in Constantinople was Thomas Bruce, Earl of Elgin. At this time the Ottomans were in charge of Athens, and in 1801 Elgin obtained permission (or so he claimed) to remove around half the existing sculptures from the Parthenon and other structures on the Acropolis. This his agents duly did and in by 1812 they had been shipped back to Blighty.

Although Elgin’s motives were based on a love of antiquity (he had heard that some sculptures had previously been burnt to extract lime), a row broke out almost immediately, and has been running off and on for the 200 years since.

Arguments for keeping the marbles in the BM:

1. They are closer to my house (and for Londoners generally). OK, this might have held water when it took a week by sea to get to Athens, but that was before Easyjet & co.

2. The Greeks won’t look after them. Pollution in Athens is less of an issue since the Olympics clean-up, and the fab new Acropolis Museum makes the BM look very last year. They even have a space ready.

3. It will set a precedent for returning stuff which will empty our museums. Well, you shouldn’t have nicked it in the first place. See this site for more hot potatoes.

4. We built a nice gallery for them. Just move with the times and use it for a permanent exhibition of our best graffiti artists. The Athens galleries are full of light and a much better setting for the marbles.