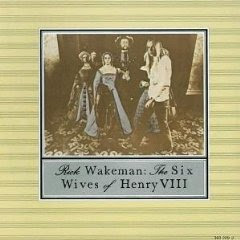 Rick Wakeman is promising a “Mock Rock Tudor Experience” when he performs his legendary concept album The Six Wives of Henry VIII at Hampton Court in May .

This is Rick’s contribution to the celebrations marking the 500th anniversary of Henry’s accession in 1509 [if you have not yet visited the palace, this is the year to come].

Rick has also been inspired to write 3 new pieces for the event – Tudor Overture, Defender of the Faith and Tudor Rock. Groovy.

If the credit crunch hasn’t hit you yet, it’s only £150 for the VIP Platinum Package, “including pre-show canape reception and chance to meet Rick Wakeman“. Groundlings will still have to cough up almost £50 for the cheap seats.

If you want to sample what to expect, I included a Youtube extract from the Six Wives in this post last year.

More events for the 500th around the world are listed at TudorHistory.