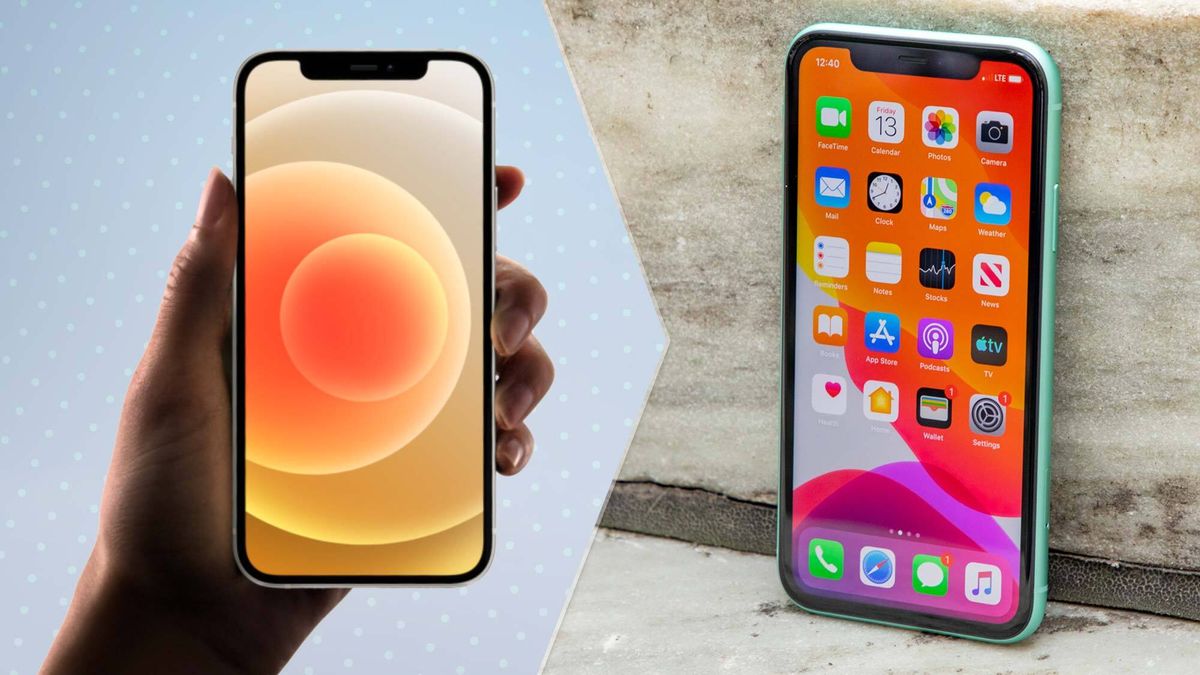 An iPhone 12 vs iPhone 11 comparison makes a lot of sense, whether you’re considering an upgrade or if you’re simply deciding between the two flagships. After all, the iPhone 11 now has a cheaper price.

As you’ll see in our iPhone 12 review, it offers plenty of upgrades over the iPhone 11. For starters, there are four iPhone 12 models, compared to three for the iPhone 11. Apple has also embraced 5G connectivity across the board, and every iPhone 12 packs an OLED screen, which is superior to LCD displays.

The differences don’t stop there: the iPhone 12 also benefits from a more durable display and a faster new A14 Bionic chip that blows away Android phones, plus a powerful LiDAR sensor on the Pro variants. The prices for the new iPhones are fairly reasonable, too.

Still, based on our iPhone 11 review, Apple’s older phone remains a strong choice for those on a budget. Is the iPhone 12 for you? Here’s our iPhone 12 vs iPhone 11 comparison that breaks down all the biggest changes.

iPhone 12 vs iPhone 11: Models and sizes

The entry-level iPhone 12 is the 5.4-inch iPhone 12 mini, which represents a new size for Apple. There’s also a 6.1-inch iPhone 12, sized similarly to the regular iPhone 11.

In keeping with tradition, Apple is retiring the 11 Pro range while preserving the standard iPhone 11 on the market. That device used to cost $699; it now starts at $599.

The iPhone 12 line has gotten quite the makeover, thanks to flatter sides instead of the iPhone 11’s rounded design. This retro-modern look is appealing, even if the sides dig into your hands a bit more.

Unfortunately, rumors of a slimmer notch have not come to pass; the iPhone 12’s cutout for its TrueDepth camera and earpiece is the same size as before. However, Apple has trimmed the bezel around the Super Retina XDR displays in all iPhone 12 models, resulting in a slightly more expansive screen-to-body ratio. According to Apple’s measurements, the 6.1-inch iPhone 12 is 11% thinner, 15% smaller and 16% lighter than the 6.1-inch iPhone 11.

All four iPhone 12 models will feature Super Retina XDR OLED displays like the iPhone 11 Pro, while the iPhone 11 offered an LCD screen. There are several benefits of OLED vs LCD, including deeper blacks, more vibrant colors and wider viewing angles. Overall, the switch to OLED represents probably the biggest improvement or positive difference an iPhone 11 user is likely to appreciate in moving to an iPhone 12.

Interestingly, Apple wasn’t able to deliver 120Hz refresh rates on its Pro-series models with the iPhone 12, as it had been rumored to do in the months leading up to launch. Battery concerns were reportedly the culprit for the omission, which certainly makes sense given that all iPhone 12 models support millimeter-wave 5G, which can be pretty power hungry.

It’s worth noting that the iPhone 12 and iPhone 12 mini displays are rated for 625 nits of average brightness, compared to 800 nits for the iPhone 12 Pro phones. So you’ll get a brighter picture for the Pros.

iPhone 12 vs iPhone 11: Specs and performance

The whole iPhone 12 line features Apple’s new A14 Bionic processor, which promises up to 50% better CPU and GPU performance compared to other Android phones. In addition, the A14 boasts a 16-core Neural Engine that delivers an 80% performance increase.

The iPhone 12 benchmarks we’ve ran reveal a pretty big jump in performance. On Geekbench 5, for example, the iPhone 12 notched 3,859 on the multi-core test, compared to 3,517 for the iPhone 11 Pro Max.

We also timed how long it took to transcode a 4K video to 1080p in the Adobe Premiere Rush app, and the iPhone 12 finished in just 26 seconds. The iPhone 11 Pro needed 45 seconds.

The iPhone 11 and iPhone 11 Pro proved to be among the best camera phones on the market, thanks to their great Night Mode and next-generation Smart HDR. The iPhone 11 featured a standard wide and ultra-wide lens, while the iPhone 11 Pro series added a telephoto zoom.

This advanced time-of-flight sensor, which is already on the iPad Pro 2020, assists with autofocus and subject detection in video recording and when using the phone’s cameras in Night Mode.

As for the other cameras, Apple is utilizing a wider ƒ/1.6 aperture for the primary camera in every iPhone 12, as well as a new seven-element lens design that is said to markedly increase the quality of photos, particularly in medium- and low-light scenarios. The iPhone 12 Pro Max in particular sports a larger image sensor with Sensor Shift image stabilization technology, and its telephoto lens achieves 2.5x optical zoom. That’s a step up from the 2x zoom of the iPhone 11 Pro, 11 Pro Max and 12 Pro models.

The iPhone 12 range can employ Night Mode and Portrait Mode on every single one of the phones’ cameras, across the front and back. And all devices in the family can achieve 10-bit HDR video recording with Dolby Vision (though the iPhone 12 Pro and Pro Max can do this at 60 frames per second, as opposed to 30 fps for the regular iPhone 12).

The iPhone 12 Pro and Pro Max also have a feature called “ProRAW”. While typical RAW images don’t work on smartphones because of all the image processing phones have to do, Apple’s system blends the two together – shooting high quality, uncompressed RAW files with some image processing on top.

It doesn’t stop you doing some post-production editing as you would an ordinary RAW file, but it does give you a hand by taking care of some of the more troublesome parts before you take a crack at it.

While the iPhone 11 series was strictly 4G only, all four iPhone 12 models employ 5G connectivity. And that’s not only for the nationwide, sub-6GHz 5G networks. All iPhone 12 variants are also equipped for millimeter-wave (mmWave) 5G, too, which will grant you exceptionally fast data speed in urban areas, up to 3.5Gbps in optimal conditions, according to Apple.

Nationwide 5G isn’t performing as well as most carriers would probably like, as even under the best circumstances, speeds have either narrowly outpaced or well underperformed the fastest LTE signals. It also proved to be a serious power drain, with our testing finding that 5G took an extra two hours off the battery life (8 hours and 26 minutes vs 4G’s 10:23)

At this very moment, then, 5G isn’t realizing its potential. But in a year to two years’ time, you’ll probably wish you had an iPhone that could take advantage of it.

On our battery testing, the iPhone 11 (11 hours and 16 minutes) and iPhone 11 Pro Max (11:54) both provided enough endurance to land on our best phone battery life list.

The iPhone 12 and 12 Pro, on the other hand, both come with a 2,815mAh battery. Apple may not be all about the biggest batteries, but seeing a drop in capacity is rather disappointing.

According to Apple the iPhone 12 has a similar battery life to the iPhone 11, despite the smaller battery, our testing showed this wasn’t the case. Over 5G the iPhone 12 and iPhone 12 Pro lasted 8:25 and 9:06, respectively.

iPhone 12 vs iPhone 11: Charging and MagSafe

The bad news is that Apple does not include a charger of any kind in the iPhone 12 box. Apple did this to help reduce waste and help the environment. Instead, you get just a USB-C to Lightning cable in the box.

Fortunately, Apple has made it easier than ever to recharge your iPhone – despite making you pay extra for a charging brick. The $39 MagSafe charger offers 15W wireless charging, and it’s easy to snap the charger on your iPhone 12 because it uses magnets.

MagSafe is not particularly fast, though, with our testing figures confirming that the battery level was at just 39% after 30 minutes of charging.  You can also opt for a $19 20W wired charger that should get you to 50% in in 30 minutes.

Are all of these differences be enough to get shoppers excited? It helps Apple has been able to keep prices consistent with its outgoing flagships. And it certainly doesn’t hurt that Apple’s made its new iPhones thinner and sleeker, despite all those additions.

Check out our full iPhone 12 review and iPhone 12 Pro review to see how these phones stack up.

NYSC to shut down camps that fail to comply with Covid-19...

‘We have no relationship’ – Dr.Dre’s father, Theodore Young claims they...