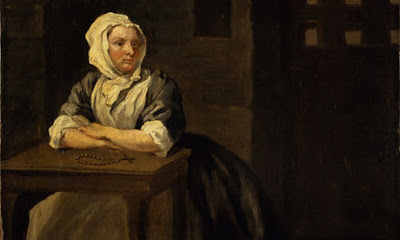 London Lives 1690-1800 is a new searchable directory of over 240,000 contemporary primary sources relating to the lives of 3 million 18th century Londoners at the lower end of the social spectrum.

The project manager is Sharon Howard, who writes Early Modern Notes and is one of the coordinators of the long-running history blog carnival Carnivalesque.

The site is based around workhouse records, criminal registers, coroners’ reports and court orders, and the London these documents describe is one where the death penalty was standard for run-of-the-mill thieving.

In many cases individuals with reasonable education and prospects fell in with wrong’uns and ended up on the wrong side of the law, and the consequences were often fatal or involved transportation “down under”.

The Keyword search facility is itself evocative – who could resist exploring CopesMadhouse and HardLabouronHulks ?

Documents relating to the same individual are assembled into biographies or lives, with historical background written by the project team. This is one of the most powerful features of the site, and will expand as more biographies are added.

I decided to have a look at the fate of Margaret Larney, an Irish mother of five who was sentenced to death for “degrading the coin of the realm”. This involved filing down gold coins, selling the filings, then passing off the “light” coin.

For women the death penalty even in this century was burning at the stake, but in this case there is no surviving record of how Larney perished.

This is an excellent resource that gets under the skin of 18thC London.

The Guardian/Observer has a glowing review too.

The picture is Hogarth’s portrait of Sarah Malcolm, hanged for her part in the murder of three women in 1733 (also featured in the Observer review above)