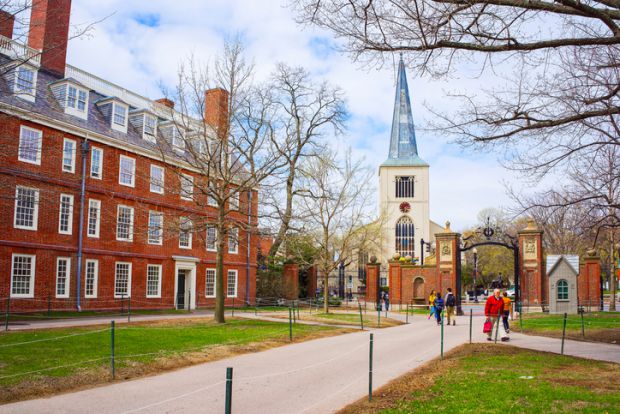 Many of the US’ highest-ranked universities are classified as private universities, including Harvard University, Massachusetts Institute of Technology, Stanford University and Yale University.

All the institutions in the prestigious Ivy League group are private universities.

We’ve pulled together the top 100 private colleges in the US, based on data from the Wall Street Journal/Times Higher EducationUS College Rankings 2021. Private universities also dominated the top 100 of the overall ranking.

A number of liberal arts colleges including Williams College, Amherst College and Pomona College have also entered the top 100 private universities in the US.

The majority of private universities in the US are not for profit.

TheWSJ/THEUS College ranking is a more student-centred ranking because of its emphasis on student outcomes and engagement. While previously we have used results from the US Student Survey for the ranking, we were unable to conduct a survey in 2020 because of the coronavirus pandemic. Instead, we have used data from the 2019 survey to inform this year’s ranking. The full methodology can be found here.

Explore more top universities in the US

Top 5 private universities in the US

It’s no surprise that Harvard University tops this list, considering that it also took the top spot in the overall WSJ/THE US College Ranking 2020. Harvard has also been a mainstay at the top of the THE Reputation Ranking for the past six years.

The cost of attending Harvard is high, with tuition fees averaging about $43,000 a year. However the university offers generous financial aid packages for less advantaged students.

According to the university’s website, it has stepped up financial aid by 75 per cent since 2007, now offering about $170 million per year to students. In fact, 50 per cent of students receive financial aid.

Massachusetts Institute of Technology has more than 500 recognised student activity groups. One of these is the student newspaper, The Tech, which is published in print and online.

MIT also sponsors 31 varsity sports and has one of the broadest NCAA Division III athletic programmes.

MIT has never awarded an honorary degree, nor does it award athletic scholarships. It has only twice awarded honorary professorships, to former British prime minister Winston Churchill in 1949 and author Salman Rushdie in 1993.

Notable graduates of Yale University include former US secretaries of state Hillary Clinton and John Kerry, and actress Meryl Streep. In fact, Yale has an impressive group of alumni including five US presidents, 20 Nobel prizewinners and 32 Pulitzer winners.

Yale is famous for its secret societies, including Scroll and Key and Skull and Bones, which only started admitting women in 1991. There are also plenty of student societies that aren’t so secret, such as the mathematics society, Chinese students’ society, foosball club and the chamber orchestra.

Stanford University was founded in 1885 by Jane and Leland Stanford, in the heart of Silicon Valley.

In total, companies founded by Stanford affiliates and alumni generate more than $2.7 trillion annual revenue, which would be the 10th largest economy in the world. These companies include Google, Nike, Netflix, Hewlett-Packard, Sun Microsystems, Instagram and Charles Schwab.

Founded in 1764, Brown University is the seventh oldest university in the United States. It is part of the Ivy League and, as an institution that prides itself on openness, was the first of the members to accept students from all religious affiliations.

A defining characteristic of the university was its introduction of the “Brown Curriculum”, which altered undergraduate education immeasurably at the institution. It was inspired by Francis Wyland, Brown’s fourth president, who argued that a student should have the freedom to “study what he chose, all that he chose, and nothing but what he chose”. The new “Open Curriculum”, which was launched in 1970, allowed students to develop their own core curriculum rather than be bound to a prescribed “liberal arts education”. It has defined Brown’s undergraduate experience to this day.

Duke University is a private research university in Durham, North Carolina. The university was founded by Methodists and Quakers in 1838. It was originally located in the town of Trinity and then moved to Durham in 1892.

The original campus was rebuilt in a Georgian architectural style and is now known as East Campus, after the 1930 addition of West Campus, Gothic in style and home to the impressive Duke Chapel tower.

There are 10 schools and colleges; the oldest is Trinity College of Arts & Sciences, founded in 1859, and the youngest is the Nicholas School of the Environment, established just 25 years ago.

Top 100 private universities in the US

Read more: Best public universities in the US