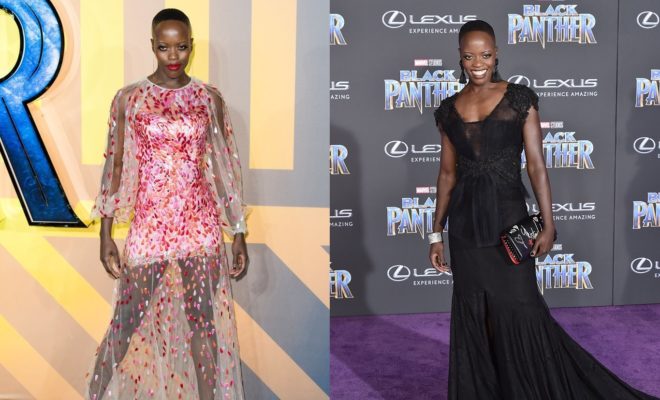 Who is Florence Kasumba. PHOTO/Getty/A scene from Black Panther

Who is Florence Kasumba? Flash Uganda Media looks at her biography, early life, education and family of a German-Uganda actress known for black panther.

Florence Kasumba was born on October 26th, 1976. She is a German-Ugandan actress, well known for her prominent roles in Dutch and German movies.

She measures an average height of 5.8, approximately 173 cm. Florence was born in the capital of Uganda, Kampala.

Florence is famous for playing an Amazonian superhuman named Acantha in the Gal Gadot-Starrer and Wonder Woman that made her very popular in Hollywood.

Never the less the role of Ayo in Captain America: Civil war and yet another superhero flick black panther made her more incredible.

Featuring in many American flicks and series such as Emerald City and The Quest, Florence was prompted to win several awards such as “the international Rising star Award” for her superhero role in the Black Panther in 2016 during the Black Entertainment Film Fashion Television and Arts award.

Florence Kasumba spent most of her early childhood with her family in Kampala, Uganda. She has kept her personal life away from media, however, it’s predicted that her parents shifted to Germany when she was still a little girl, therefore, had to spend her entire childhood in Essen, Germany.

At the age of 12, she made up her mind to pursue a career in acting after watching the famous Rocke Musical, Starlight Express where she felt inspired to join the movie industry.

Florence’s acting career started while studying in the Netherland, where she was given a chance to play as ‘Silke’ in this 2001 film titled “I love You Too” this was at Fonty University while perusing her studies.

Though it was a feature film, her ambitions for movies pushed her to go back for basic after her graduation which then made her take up many roles in musicals such as ‘the Lion King’, ‘West Side Story’, ‘Cats, Evita, Chicago and Beauty and the Beast.

Florence then decided to get back to celluloid, realizing she had a great experience through musicals. But before moving to celluloid Florence was featured in several movies, while in New York, such as the title role in the world-renowned Elton john’s musical, she was then cast as Lisa in a German production, Mamma Mia and Aida.

Kasumba is known for her role in superhero flick black panther. FILE PHOTO

In 2006, Florence Kasumba made her television debut in the longest-running German drama, Tatort for 10 consecutive years she was part of this famous show.

The black Ugandan actress was also able to take up roles in several German films which include the stoning and Age of the cannibals.

2006 and 2012 was a mark stone for Florence to concentrate only on her television career where she appeared in some German TV series.

In 2013, Florence was seen in a couple of German TV series, years followed she appears as Talmuh in the American reality competition series, “The Quest”.

2016 was Florence Kasumba’s big breakthrough; she hit the target of being cast as Ayo in the ‘Marvel Studios” movie Captain America: Civil War.

The black Ugandan woman later appeared in Dominion one of the American greatest supernatural television series where she played the role of Daria in just three Episodes in perused of her career.

Her experience grew bigger after being featured in Captain America: Civil war and Black panther where she acted as Ayo in the 2018 Marvel studio Film. To date the name Ayo is a recurring character in her career of acting.

Florence Kasumba won several awards, to mention in 2016 she was the only international rising start woman to win the “International Rising Star Award at the Black Entertainment Film Fashion Television and Arts Award”.

Her dream was to enter the list of elite actors and so with wonder Woman, Florence found her way to be among the famous actors who have appeared on both DC Comics film and Marvel Cinematic Universe.

Not much of her controversy has been revealed in the media, so far Florence has hidden away her profile and family background from the media.