Home History The Minority People Groups Of Central Nigeria , The Case Of The...
Share It To Your Friends:👥
Nigeria North Central Map 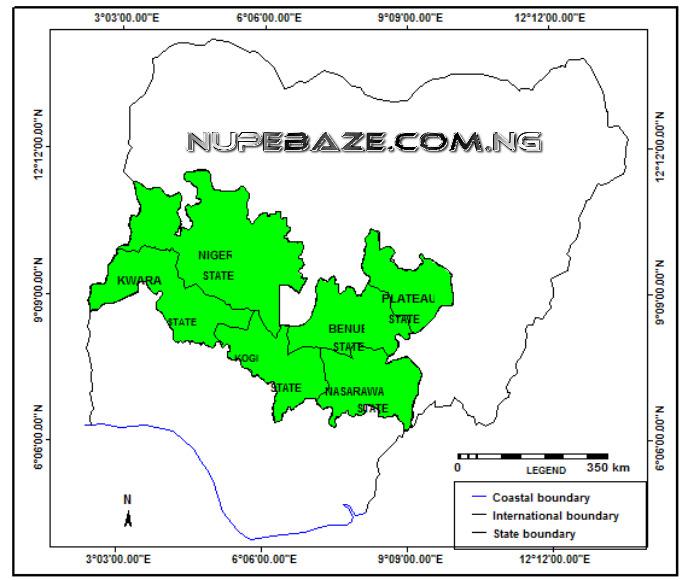 The area of Nigeria often referred to as the Middle Belt has repeatedly been viewed merely from a geographic sense .
However , what needs to be understood is the area is as an ethnic and linguistically diverse region within the landscape call northern Nigeria ( Meek , 1931, James , 1998 ).

The people groups found in the zone regarded today as the Middle Belt , before the coming of Christianity in the early 1900s , were predominantly non – Muslims and then people with various but related forms of cultures, socio – political organizations , and beliefs .

This perhaps explains to a large degree why most initial literature about Nigeria often referred to the societies in the area as “ pagan peoples/districts of northern Nigeria ” ( Gunn, 1956, Sharwood-Smith , 1969:102, etc.).

The fact that Christian missionaries activities flourished mainly amongst these groups seen as pagans ( Ochonu , 2014 ) of the then northern Nigeria after Lord Lugard’s proclamation of Nigeria in 1900 suggests that the Middle Belt Movement ought not to be regarded essentially as a political movement .

As Barnes ( 2007 ) argues , the Middle Belt struggle could also be understood as the quest for assertion for an esteemed Christian identity by Non – Muslim northerners no longer wish to be seen as pagans , who should be subservient to the emirate system , but as groups of people who are not simply united culturally but through a shared Christian faith and values of equity and brotherhood to all mankind .

To substantiate the above, history books have it that the genesis of the Middle Belt movement goes back to the formation of the then Birom Progressive Union ( BPU ) in 1945 under the leadership of one Patrick Dokotri , a former Catholic seminarian. One historian of that time , Robert Sklar , reports that the original objective of the BPU was to agitate before the colonial government for improvements of the political and economic situation of the Birom people .

However, the need for the struggle of a Middle Belt area, separate from northern Nigeria, as a result, emerged later in 1949 after a motion was presented before the northern House of Assembly to disallow Christian missionary work in the entire north. It was at this point , we understand, that Dokotri decided to appeal to a number of other Christian leaders in the north to form what was initially called the Northern Non – Muslim League ( NNML ), which later took the name the Middle Zone League, United Middle Belt Congress , and at this time as the Middle Belt Forum .

Linked to this is the role of the about 60 diverse people groups of current Kaduna state in the middle belt struggle from its inception .
The people of the then Zaria and part of Nassarawa Provinces , as they were called , having felt exploited and subjugated by the Hausa sarauta system joyfully joined the NNML and on the 10th January 1955 the United Middle Belt Congress , six years later now a political crusade , was inaugurated at Kafanchan and two years later a conference of UMBC held on 26th August 1957 at Kafanchan as well .

In order assert their uniqueness of history , different from the Hausa , and in a demonstration of common languages and cultures , we read the people of the area , a geography I often describe as ‘non – Hausa / Fulani peoples of Kaduna State ‘ , were at that time 1950s known by a group named ‘ The Nerzit Union ‘.
The emblem and crest were a sketch of a hunter with bow and arrow illustrating the traditional occupation of the people – hunting of wild animals – and it was the platform of Nerzit Union that they contested for elections in 1959 .

It is instructive to note at this point that there were hardly any kingdoms or empires in the locality of the middle belt ( Illiffe, 2005:100 ) until the 1400s thus there were few or no expansionist wars for territory as we have often been made to believe .

What I have found is the so-called ‘ inter – tribal wars ‘ described in most Eurocentric anthropological accounts came as a result of Fulani – Hausa slave raids of the area which came in full force after the fall of the Habe dynasty in the early 1800s ( Smith, 1960:76, Mason, 1959 ).

Why did I write this? There is an increasing sense of awareness amongst the minority people groups , the world over , and this is applicable to the are in focus .
The need to understand history in its proper context is significant if any meaning progress is to be made at all. Similarly, this piece registers that the Middle Belt agitation did not begin in our time .

It is an age-long struggle which is worth sustaining for the real emancipation of minority groups of northern Nigeria .
History is one essential wealth required to free oneself from any form of oppression , therefore , make reading habit a culture .