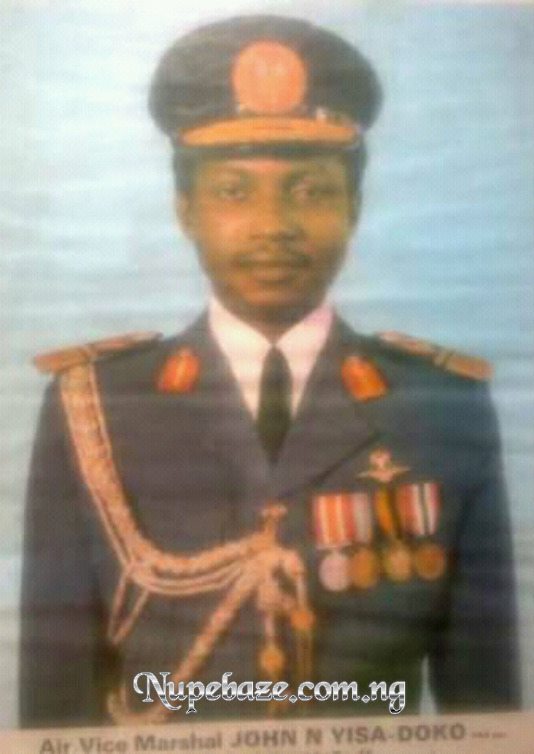 AVM John Yisa Doko GCON , CFR ( 1942 - 2012 )
Air Vice Marshal John Nmadu Yisa Doko was amongst the first batch of pilots recruited to serve in the newly formed Nigerian Air Force and was subsequently sent to Ethiopia for formal training .
He is Nupe by tribe and was born and brought up in Doko , under Lavun local government in Niger state .

Air Vice Marshal John Nmadu Yisa Doko was enrolled at St Peter's school in Doko in 1947 and later proceeded to St John's school in Bida in 1951 where he completed his primary education .
He moved to Government College , Kaduna after his primary school where he graduated in 1961 .

Air Vice Marshal Yisa Doko enrolled into the Nigerian Air Force in 1962 and was one of the pioneer officer cadets sent to the Imperial Ethiopian Airforce for pilot training between 1962 and 1964 .
He was commissioned as a Second Lieutenant on return in 1964 .
He was given command over the first air platoon formed , when the German technical assistance team concluded their mission to form the Nigerian Air Force .

AVM Yisa Doko was the first indigenous Nigeria Chief of Air Staff between 1975 - 1980 .
He was also the first to reach the position of Air Vice Marshal in Nigeria .
He was said to be a keen hunter during his formative years growing up on the dusty streets of Doko .
He played an important role during the Nigerian Civil War ( Biafra War ) as Officer Commanding Nigerian Air Force wing and senior officer in charge of operations. He was the Madaki Doko .
He died in 2012 after a brief illness .