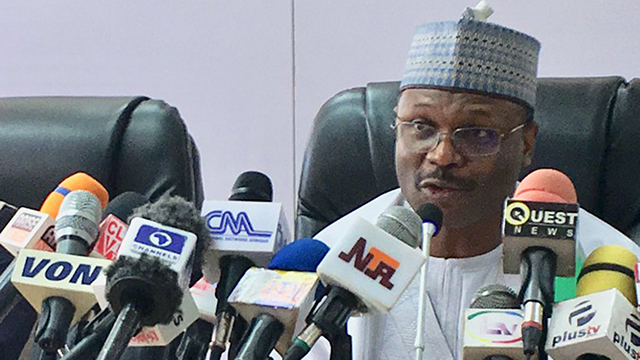 INEC Chairman, Professor Mahmood Yakubu, announced this at a press briefing on Saturday morning held at the commission ’s headquarters in Abuja .

“ Following a careful review of the implementation of its logistics and operational plan , and the determination to conduct free , fair , and credible elections, the commission came to the conclusion that proceeding with the elections as scheduled is no longer feasible ,” Yakubu said.

Yakubu said the Presidential and National Assembly elections, initially scheduled for Saturday , February 16, will now hold on February 23, while the governorship and state houses of assembly elections will take place on March 9 .

The press briefing followed a crucial meeting of the INEC boss with top officials of the commission which started late on Friday night .

“ This was a difficult decision for the Commission to take , but necessary for the successful delivery of the elections and the consolidation of our democracy, ” Yakubu said.

“ The Commission will meet key stakeholders to update them on this development at 2 p .m . on Saturday, 16th February 2019 at the Abuja International Conference Centre, ” he added .

Polling centres were initially meant to open Saturday at 8 a. m . , with more than 84 million registered voters across 36 states and the Federal Capital Territory , Abuja .

The postponement may heighten tensions in what has been a tight race between incumbent President Muhammadu Buhari , and his main challenger from the People ’s Democratic Party Atiku Abubakar. The political parties of both candidates have accused each other of trying to rig the vote .

Buhari arrived his home town of Daura, in Katsina State on Thursday, where he was planning to vote . Vice President Yemi Osinbajo had also travelled to Lagos to vote .

In reaction to the postponement , Osinbajo ’s spokesman Laolu Akande said: “ This is truly disappointing , but the march to the next level continues . ”

It will not be the first time that the Commission would postpone a scheduled general election .

In 2015, the presidential election was shifted from February 14 to March 28th , 2015; while the governorship and assembly elections scheduled for 28 February were shifted to 11 April. The elections were postponed because of security issues .

In the previous election cycle in 2011, the National Assembly elections were postponed on the day the election was to be held due to logistics failure.