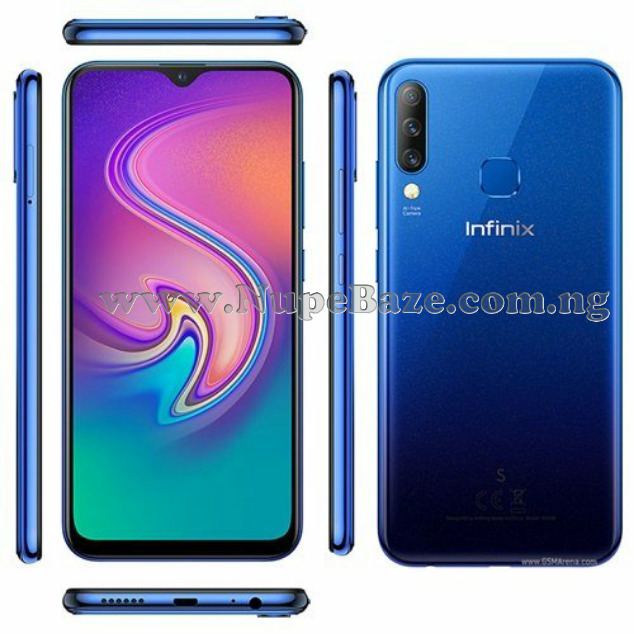 This is the first smartphone that runs on Android 9 pie from the Chinese smartphone manufacturer (Infinix), which also features a triple rear camera’s setup and a water drop shaped display notch.

The smartphone came in three different color variants ( sapphire cyan, Milan black, Gold) with an IPS LED of 6.26 inches which features a 720 x 1520 pixels. The body of the device made up of a 2.5D Glass with slim bezels covering around the screen and ends in a massive chin. A waterdrop notch that houses selfie (front) camera at the top side of the screen.

The back of the Infinix Hot S4 made up of a glass panel, this part of the smartphone houses the fingerprint sensor, rear camera’s and as well as the LED flash.

This device from Infinix mobility boasts of a triple camera’s setup arranged vertically on the rear side, a primary 13 megapixel, secondary 8 megapixels, and a 2-megapixel wide range. Below the camera’s lie a Quad-LED flashlight for a dark environment.

The front camera features a 32-megapixel camera which captures great pictures via AI technology, the selfie camera can also be used for face unlock.

Hot S4 powered by MediaTek Heli P22 soc coupled with four cores of Cortex A53 Processor which clocks a speed of up to 2.0Ghz, the smartphone runs the latest version of Google Android 9 pie and as well as the current version of Infinix native XOS (v 4.0 honeybee).

Lastly a GE8320 GPU on the device to handle multiple tasks at once, like gaming and graphic.

Hot S4 came in two different varieties of storage, 3GB or 6GB of RAM and 32GB or 64GB of inbuilt storage, and expandable up to 128GB via micro SD card.

As for the battery aspect, Hot S4 powered by a massive 4000mAh battery capacity, but we are not sure if the device supports fast charging technology.

YOU MAY ALSO LIKE TO SEE:Infinix Hot 9 Specifications , Features And Price In Nigeria