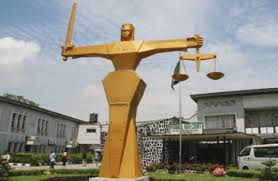 - The chairman of PACAC, Professor Itse Sagay, has said that Nigeria is running a failed judicial system

He said the judiciary did many terrible thing in 2007

Sagay in an interview with The Nation, said it was disastrous that the country's judiciary is acting as presidential tribunals, adding that the supposed last hope of common man, did many terrible things in 2007.

NAIJ.com gathered that he, however, said the chief justice’s directive that special courts should be designated by chief judges of various courts in the country for corruption cases only, and the establishment of a monitoring group, were very excellent ideas.

He said: "Let me start by saying that the President was right. The judiciary, acting as presidential tribunals, was a disaster.

They did many terrible things, particularly in 2007.

That was a most shameless act at a high level, where they could open their eyes and write that a ballot paper without serial number is a valid ballot paper. "It never happened anywhere in the world. That was most shameless.

There have been a lot of improvements since then, even though we still have corrupt judges. There is no question about that – at all levels.

But the level of corruption has gone down.

There is an attempt to fall in with the spirit of the anti-corruption struggle that the Buhari administration has introduced. "I always say that the Chief Justice’s directive that special courts should be designated by Chief Judges of various courts in the country for corruption cases only, and the establishment of a monitoring group, are very excellent ideas.

"They were ideas we were pursuing for which we were not successful because the National Assembly to whom we sent the bills refused to consider them. But the Chief Justice did it administratively and they’re operating and doing very well. "You heard recently that two former governors were sentenced to lengthy imprisonments and it was by one of these courts. So, I’m encouraged by that. But, we’re still watching the Judiciary.

Everything is not perfect yet. "We’re still far away from the type of Judiciary we had, particularly the type of Supreme Court we had when Eso, Oputa, Mohammed Bello, Obaseki, Karibi-Whyte, Nnamani were there. Then we had the best Supreme Court in the world. "It has dropped sharply since then. So, we are nowhere near there. And I keep telling the present crop of judges, including the Supreme Court justices who are all my juniors, that they should aspire to what we had before. They’re not there yet and I want to see them positively aspiring to that.

Speaking on the claims that President Buhari's anti-graft war is selective, Sagay said that the Peoples Democratic Party (PDP) which in power between 1999 and 2015 had access to Nigeria’s assets and resources.

He said: "The PDP was in power from 1999 to 2015. They were the ones who had access to Nigeria’s assets and resources. And they had an inclination and orientation of simply helping themselves to state assets without looking back. "I mean, it was just a horrible thing.

I’ll just give you one example. When they were there, they were fraudulently obtaining petroleum subsidy amounting to N380billion a year, saying they had supplied petroleum products, which they never supplied. You’ve seen all the recoveries that have been made.

"Look at what they did during the elections when Diezani brought her billions to bribe INEC officials all over the place, including Rivers state. That’s why I laugh when Wike says he has been elected. The Rivers state chief electoral officer was bribed. And she deliberately distorted that election and ensured that it was rigged in favour of Wike.

"A lot has happened since then. Our reserves dropped from over about $50billion to less than $2billion. They were spending money like water. In the last days, Jonathan was travelling round the west, dolling out huge amounts of dollars to Obas and so on.

"Look at the former National Security Adviser; look at the amount of money, just walking into Central Bank to take away $46million in sacks. It was so primitive and brazen. That is why they are the ones being prosecuted; because their impunity was so high that I don’t think it’s been experienced in this country before.
Posted By Aliyu Ndagi
Category: News